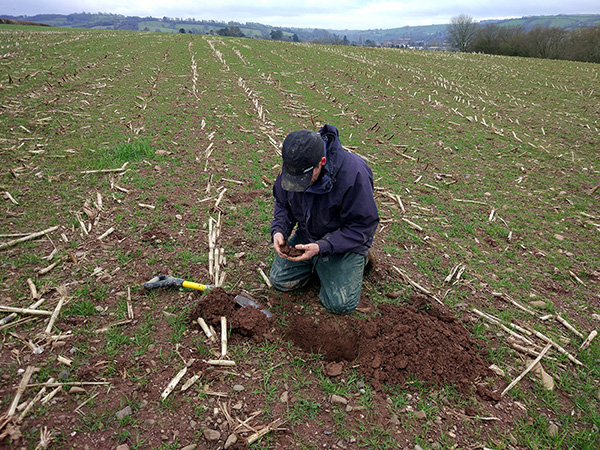 The paper reflects a collaboration of effort and several years of hard work to reach this point, creating a scientifically robust, easily replicable testing protocol that will place SOC data, knowledge and the ability to act on results in the hands of the farmers.

Hazel Kendall, Head of Land Management at WRT, said: “At WRT we are a bit obsessed with healthy soils and the role they play in catchment management; how the land is managed directly affects the health of our rivers and streams.

“We seek a holistic approach in our projects: encouraging healthy soils helps to stabilise and reduce erosion and reduces sediment and nutrients reaching our watercourses while supporting a more diverse and sustainable landscape.

“The publication of the paper is a massive boost to our collective ambition, supporting understanding for greater sustainability and resilience and our southwest farming communities, which are the backbone of our rural landscapes, while creating potential for diversification too.”

SOC is a part of the Organic Matter (OM) found in soils. It consists of dead and decaying plant material such as roots, crop residues/stubbles, and living organisms such as fungi and bacteria, plus other elements including nitrogen, phosphorus, and potassium, which are essential to plant growth.

Carbon is just one of the components of Organic Matter in soil. It is important for contributing to its overall physical and chemical properties, ensuring it functions effectively, supports nutrient cycling and availability, structure, the ability to store and release moisture, as well as sequestering Carbon.

Hazel added: “The health of our soils is crucial to support food production but also provides so much more, which people may be unaware.

“For example, the ability of soil to absorb rainfall and store water provides resilience against droughts or floods, while it also acts as a natural water filter removing pollutants.

“A healthy soil is also teeming with thousands of micro-organisms which contribute to biodiversity –  the UN Food & Agriculture Organization states it is ‘… one of nature’s most complex ecosystems and one of the most diverse habitats on earth’.”

Maintaining the turnover of natural Carbon cycling contributes to the production of oxygen and absorption of the greenhouse gas CO2 within this process. Optimising these functions allows us to underpin food, crop, and fuel production and boost resilience to climate change through land management – and it is 100% natural.

Soil Carbon has been a hot topic for several years; in 2011/12, WRT set out to investigate the current knowledge of SOC levels in local soils but found that data was virtually non-existent.

Samples were taken in 2015, around the time of the Paris COP21 (Climate Conference) which also launched the 4 per mille initiative – https://www.4p1000.org/ – definitively outlining the role and potential that soil management has in mitigating climate change, on a global scale.

By quantifying current SOC levels, it is possible to estimate the potential increase in capacity and sequestration under certain management within the limits of that soil and localised circumstances.

“We hoped that this would realise the ability for farmers to consider Carbon sequestration as diversification and supplementary means of income, working alongside and complementary to their farm business while providing the confidence via evidence and rigour to underpin the concept of investment for both buyers and sellers,” Hazel explained.

This aligns with the direction of change anticipated in Defra’s new Environmental Land Management scheme (ELMs), which seeks to support payments to land managers for broader provision and delivery of environmental goods.

The work by the contributing authors has been a consistent desire to see this realised and has spanned numerous individuals, organisations, and countries.

Through collaboration, it is now possible to collate data and directly compare evidence behind this approach.

For WRT, this provides a timely boost to the Channel Payments for Ecosystem Services (CPES) project that is collecting samples across two catchments in Devon: the Lyd and the Gara, providing farm-scale and catchment-scale data.

The charity is also revisiting and resampling the original TVOG+B farmers to compare SOC levels five years on – which is unique data.

Further opportunities through this project have engaged businesses and evaluated means for brokering or facilitating transactions between parties as a result.

Reducing Carbon emissions and increasing Carbon sequestration has never received as much attention as it does now, highlighted by the Climate Emergency, impacts on food supply chains from Coronavirus, and public perception of an increased value of nature, biodiversity, and environmental matters.

Hazel said: “We are pleased that we have been able to contribute to this larger, global discussion, based on research and collaboration from here in the southwest.”

The paper: Effect of farm management on topsoil organic carbon and aggregate stability in water: case study from Southwest England, UK  is published in the Soil Use and Management journal at https://onlinelibrary.wiley.com/doi/epdf/10.1111/sum.12658.

The paper’s authors are: