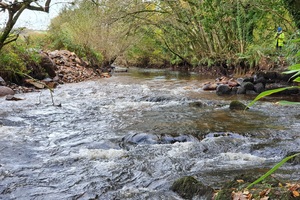 We are celebrating, along with our partners, the successful completion of two river restoration projects that will boost wildlife and improve the health of the River Camel and one of its major tributaries, the De Lank River.

The River Camel Restoration Strategy was launched by the Environment Agency and Natural England after the Camel Valley, a Site of Special Scientific Interest (SSSI), was found to be in ecological decline.

A number of elements were preventing the river from functioning properly including agricultural factors, sewage discharges, water abstraction and invasive species. One of the biggest challenges has been the removal of obsolete structures such as disused weirs that can act as barriers to migratory fish.

The River Camel is an internationally important river for the Atlantic salmon. It is also important for sea trout, sea lamprey and otters.

We have worked with the Environment Agency and Natural England to protect and restore the ecology of the Camel Valley. In the past two years, efforts have focussed on Grogley Weir on the Camel and Keybridge Weir on the De Lank where heavy machinery has been used to remove structures including an old gauging station. The improvements have cost approximately £450,000.

The work at Grogley involved the removal of a concrete weir, sheet piling and gabion baskets plus approximately 60-65 metres of block stone on both banks.

The new banks have been re-profiled, seeded and Bionet installed to reduce the potential for erosion until vegetation is re-established. In addition, a series of wood deflectors have been added to improve flow and habitat diversity and provide cover for fish.

There will now follow a winter of tree-planting to replace trees lost in the works and provide a new wet-woodland habitat in the floodplain.

James Burke for the Environment Agency said: “The removal of the old gauging station on the River Camel is a great example of how we should restore the environment after a structure becomes obsolete and is preventing a river from functioning properly.

“It also removes a problem for future generations and improves the environment.”

Keybridge Weir was a major obstacle to migratory fish. Its removal has been welcomed by Dr Bruce Stockley, head of fisheries at the Westcountry Rivers Trust who said: “It means the river can flow naturally again.

“This will ensure salmon and sea trout are able to make their migration up the De Lank River to their spawning gravels on Bodmin Moor, protecting both species for future generations.”

Both projects are part of the EU-funded Water for Growth programme and were led by Westcountry Rivers Trust (WRT) working in partnership with Natural England and the Environment Agency. South West Water helped co-finance the scheme.

In addition, Natural England is working with the Westcountry Rivers Trust to control Himalayan balsam, an invasive species.

Read more about our work on Keybridge weir at: wrt.org.uk/keybridge-weir-removal

Read the press release at: gov.uk/government/news/successful-restoration-of-cornwall-s-river-camel