Flood mitigation in the Par catchment in the ‘StARR’light 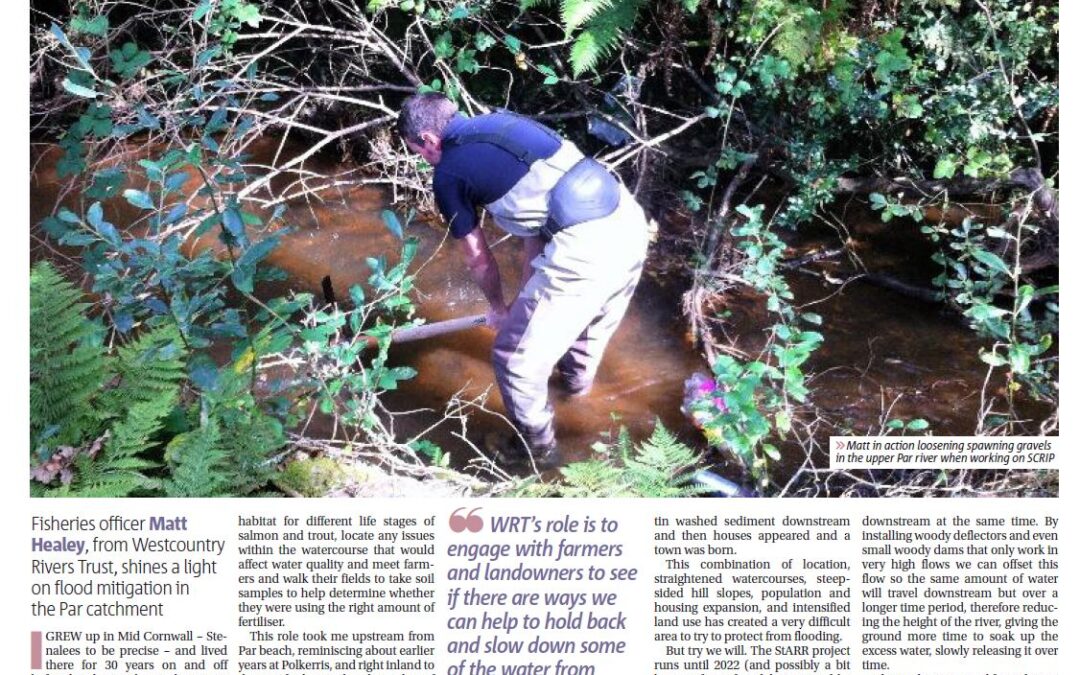 I grew up in Mid Cornwall – Stenalees to be precise, and lived there for 30 years off and on before heading over to the north coast to be closer to the surf.

Very recently I headed back over the Tamar to Plymouth but I spent much of my teens, twenties, thirties and now my forties splitting my time between the shores of mid-Cornwall for one sea-based activity or another.

I’ve pootled about the south coast on my kayak covering routes from Falmouth to Fowey and everywhere in between, relishing in the south coasts rolling green hills, sublime estuaries and plethora of coves.

Some secret, some not so much. It was spending time in this great green and blue that made me realise that this is the area I want to work in and so off back to college I went; four years later a degree, lots of volunteering and then a very fortunate opportunity to work with Westcountry Rivers Trust (WRT). And I’m still here nearly eight years later.

The first project I worked on for WRT was called the South Cornwall River Improvement Project (SCRIP).

I had to undertake walkover surveys of the river corridor to identify habitat for different life stages of salmon and trout, locate any issues within the watercourse that would affect water quality and meet farmers and walk their fields to take soil samples to help determine whether they were using the right amount of fertiliser.

This role took me upstream from Par beach, reminiscing about earlier years at Polkerris and right inland to the A30, finding and exploring bits of watercourse I didn’t know existed before, and some only a five-minute drive from my doorstep.

It was amazing to discover all of these unknown places from the reaches of  the Upper Par River and even out to Menabilly and the stream that flows through the wooded valley, with the red and white day marker standing as a proud beacon in the AONB.

Some five years, after the end of SCRIP, I am once again fortunate to be working in the Par Catchment on the St Austell Resilient Regeneration (StARR) Project, although the reasons for this role are somewhat less fortunate for the residents of St Blazey.

In November 2010, St Blazey was hit by its worst flood event (possibly in living memory). In one-night 40mm of rain fell, a deluge of a downpour which caused people to be trapped in their homes, roads to flood and caused millions of pounds worth of damage.

StARR has come about as result of this downpour and because of smaller and more regular flood events that have happened since. None the less distressing for those affected.

The project very simply aims to try and reduce the risk of such a flood happening again. This is a difficult task from the offset as St Blazey was once part of an estuary with boats being able to anchor up at Ponts Mill, a mile inland from St Blazey.

The historic mining up high in the catchment for lead, china clay and tin all washed sediment downstream, and then houses appeared and a town was born.

This combination of location, straightened watercourses, steep sided hill slopes, population and housing expansion and intensified land use has created a very difficult area to try to protect from flooding.

But try we will. The StARR project runs until 2022 (and possibly a bit longer after a few delays caused by Covid-19 and my own impending knee operation). WRT’s role is to engage with farmers and landowners to see if there are ways we can help to hold back and slow down some of the water from these heavy rain fall events that are becoming increasingly common. Not even just in winter but now during summer.

Land management is a key part of our plan and healthy soils are integral to it. Not only do soils have the ability for allowing rainwater infiltration and sequestering carbon but, along with water, they are absolutely key to life and so must be protected if we are to be able to enjoy a healthy food supply, not only in the future but the present.

Other tricks we can use are planting trees and even chopping them down in the right places. We can use trees to divert flows away from the watercourse in heavy rainfall events to offset the timing of something called “peak flow” where the most amount of water heads downstream at the same time. By installing woody deflectors and even small woody dams that only work in very high flows we can “offset” this flow so that the same amount of water will travel downstream but over a longer time period therefore actually reduce the height of the river, giving the ground more time to soak up the excess water, slowly releasing it over time. This is also very good for reducing drought risk and keeping watercourses well stocked through the dry summer months, which is good news for the fish.

All of these actions will improve biodiversity, from microbes in the soil and insect life creating bird and fish food for salmon and trout. Yes, Salmon. The river Par is a Salmon river and although the Par is an overlooked watercourse with plenty of issues, the measures we want to undertake will have benefits throughout for community, business and wildlife.

To strive for these improvements in the Par river and its catchment is exactly what it’s all about in this line of work, and WRT as a charitable organisation.

To be able to contribute restoring and improving Cornwall’s special places is extremely rewarding; next time I’m in the sea around the South Cornwall AONB I can look around knowing I’m playing a part in protecting our rivers and their habitats for all who depend on them.