The State of Our Rivers Report 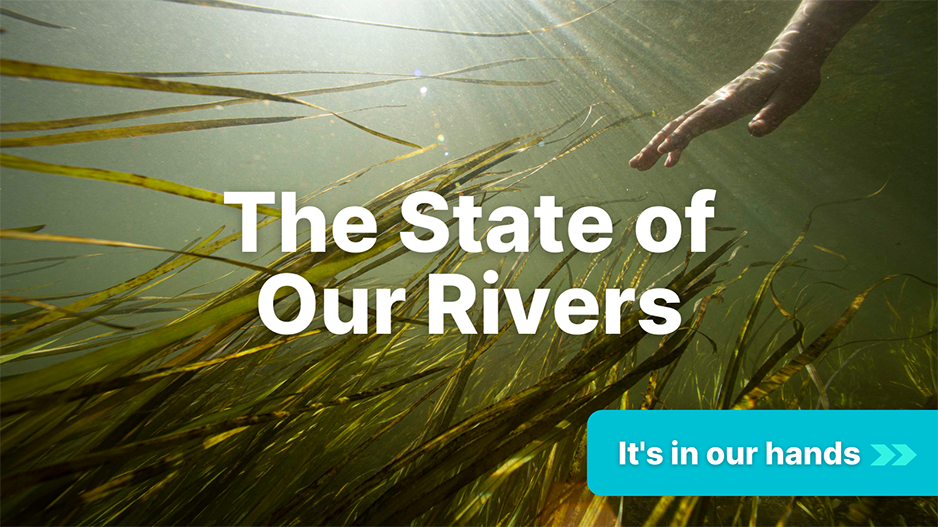 Our national body the Rivers Trust has today published its State of Our Rivers Report.

This provides people in England with details to help them understand the health of their river like never before, on both a national and local scale. The report gives one clear message: the race to climate resilience will be won or lost on rivers – and we are currently losing.

Visit theriverstrust.org/key-issues/state-of-our-rivers to see what else it has to say.

Rivers are on the frontlines of our nature and climate emergencies, and a radical rethink with proven nature-based solutions could strengthen them to weather the storms ahead. Action to improve river health must be taken quickly; it must be joined-up and at scale.

Our CEO Dr Laurence Couldrick said: “For more than 26 years Westcountry Rivers Trust purpose has been to restore and protect the region’s rivers and wetlands. But it is an ongoing struggle as more and more pressure is put on these essential natural resources.

“We work directly with farming, fishing, business and water sector organisations to make positive progress, but we know there is so much more to do.

“Our volunteer citizen science programme Westcountry CSI is leading the way for individuals to help bring about positive change in the health of our rivers.

“In this year alone, our volunteers have provided 1,839 river surveys looking at water quality, wildlife and pollution aspects which provides essential data to inform our work. This is the largest return since we started our citizen science scheme five years ago and reflects the growing passion the public have for looking after the nature on their doorstep, and further afield.

“This report should act as the touchstone to galvanise individual, communities, organisations, local authorities and the Government to act now for healthy rivers – without them our lives will be very different.”

Mark Lloyd, CEO of The Rivers Trust, said the report made it clear that although small battles may be being won to protect our rivers, we still are losing the war.

“The trend of incremental, disjointed improvements which treat vital habitats as an afterthought must change. We need more robust legislation, greater investment, and to embrace nature-based solutions to turn the tide towards river recovery.

“Cleaning up rivers won’t be easy. Their current state is the result of hundreds of years of impacts, with many still suffering the consequences of our industrial past, and the age of coal-fired power. But this does not mean we lose hope. It means we act now to save rivers for future generations.”

England’s rivers, including 85% of the world’s precious chalk streams, are widely agreed to be a national treasure, yet only 14% are in good ecological health, and every single one fails to meet chemical standards.

Pollution is not the only problem, though, as abstraction and habitat destruction also put the future of rivers in jeopardy.

This report enables the public to see localised data on the various impacts facing England’s rivers, giving them the information and evidence to take back rivers and hold polluters and government to account.

It uses a comprehensive collection of data, previously only used by water scientists and government departments, transformed into a suite of interactive maps, bespoke infographics, and an animation, visualising the reality of river health for the whole of England.

Charles Watson, Founder and Chairman of River Action UK, one of the speakers at the report’s launch event on 24 Sept, said: “State Of Our Rivers finally provides us with a highly accessible and comprehensive documentation of the environmental status of all our river catchments.

“This offers a perfect potential reference point from which activists can campaign to bring river polluters to book – and for the nation’s growing army of citizen scientists, who need to compare their results.

“Hopefully the next edition will realise one of the calls to action here – being able to include more invaluable data local groups are collating each day on water quality and river health.”

World Champion and Olympic medal-winning open water swimmer Keri-anne Payne said: “This report is going to be a game changer for open water river swimming, not only to get a sense of how bad the state of our rivers is but more importantly what we can do NOW about it as individuals, businesses and water lovers”.

The Rivers Trust is a collective of conservation experts with a wealth of data and expertise. It is the national representative of 63 local Trusts in England, Wales, Scotland, Northern Ireland and the Republic of Ireland, which includes more than 350 dedicated specialists and over 60 farm advisers giving confidential expert advice. The Rivers Trust works in partnership at a catchment scale to make its vision of wild, healthy, natural rivers, valued by all a reality.

Westcountry Rivers Trust is a charity working at the forefront of river conservation across Cornwall, Devon, Somerset and West Dorset. Created in 1994, it has inspired the river movement as it is known today.