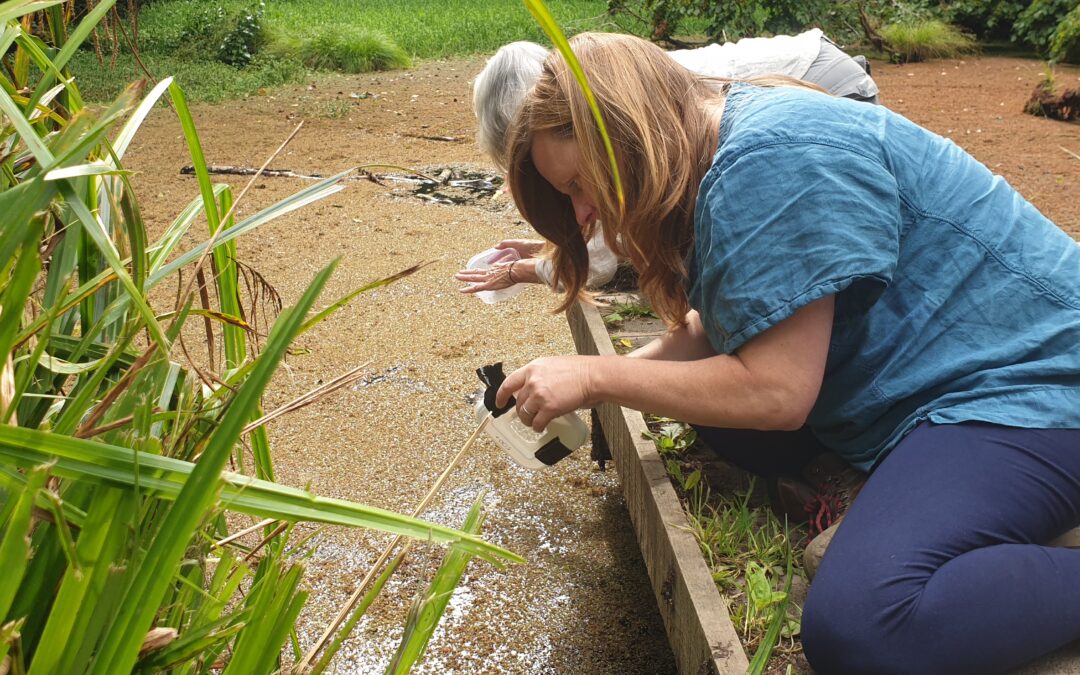 North American weevils have been released by the Plymouth River Keepers (PRK) team and their supporters to help clear the Budshead Pond of Water Fern (Azolla filiculoides).

The weevils eat this non-native invasive plant, which originates from the Americas, and has been covering the surface of the water, blocking out light and depleting it of oxygen which can harm the native wildlife that lives in the pond, as well as the native plants that live in the water.

Jenny, project officer for PRK said: “These tiny weevils are known to have a really good success rate in reducing and removing Water Fern from waterways, and we are confident they will soon have Budshead Pond back to its former glory as a wildlife pond.

“The pond is home to a vast array of native wildlife like palmate newts, toads and common frog, as well as a large range of invertebrates including pond snails, and dragonfly and damselfly nymphs, all of which are likely to be feeling the negative effects of the Water Fern.

“We want to reassure people that the introduction of these tiny non-native weevils will not have any harmful effects on our native wildlife.”

Water Fern was introduced to the UK in the 1840s as an ornamental pond plant, before escaping into the wild; it is now one of the UK’s most invasive plants. It starts out green and can look similar to Duckweed, but over time turns pink due to its association with a nitrogen-fixing bacteria. The plant spreads very rapidly, forming a dense mat up to 30cm thick on the surface of the water.

The weevils cause considerable damage to the Water Fern until it sinks and naturally decomposes at the bottom of the pond. During this process, the Water Fern may begin to look brown and dead, but it is really important that it is left in the water, as removing it would interfere with the biology of the weevils.Once the weevils have exhausted their food supply of the Water Fern they will take to their wings and fly off to find the next batch to work their magic on. Some weevils may over-winter in the pond and will continue their good work next spring, should the Water Fern come back.

Using the weevils is an environmentally friendly way to control the Water Fern, without the use of harmful chemicals, such as the herbicide glyphosate. Removing the plant from the water by hand would cause it to grow further, as it spreads through being broken up into fragments, which would each go on to form new plants.

This work has been assisted by Plymouth City Council and members of the local community, including the Friends of Ernesettle and Budshead Wood, and Budshead Creek CSI Volunteers.

Later this month, the first of our PRK fixed point photography (FPP) posts is being installed at Budshead Pond; in part this will enable us, with you help, to monitor the progress of the weevils. If you are in the area, we would love it if you took a photograph for us with your phone or camera and send it to us either by email: [email protected] or on social media using the #PRKNature hashtag. We will use these photos to make a timelapse video of the change in the Water Fern over time.