Floundering on the Hayle 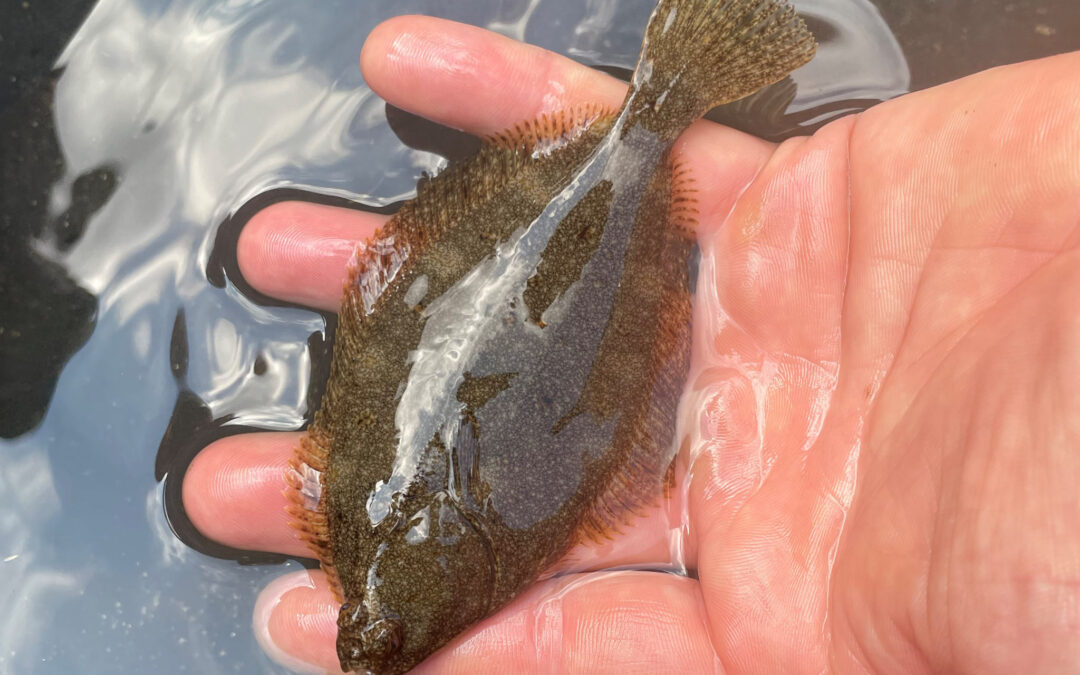 Our Head of Fisheries Dr. Bruce Stockley notes a rather unusual find on a river research trip.

While surveying the River Hayle for some very special heavy metal trout, we found a flounder as big as your hand.

It’s always a surprise to find a sea fish in a river survey, and by that, I mean a stretch of river with not a drop of seasalt in it, and miles from an estuary.  Bass, mullet, and many flat-fish poke more than their noses into fully freshwater, seeking food, security, and a different environment from sea.

Our surveyor is used to calling out “trout” as each fish is caught and put into a bucket.  When an unexpected fish is caught, the call in this case was, “Flounder!”.  I assure you that you could hear the exclamation mark, and the pleasure at the unusual find.

Often such fish are tiny, semi-translucent and easy to miss.  On the Hayle, our flounder was what you could call ‘a proper fish’, the same length as some of the trout which it shared its survey bucket with.

What made this fish of particular interest was that we were concerned for its safety.  We had cool water, air pumps, nets and all the accoutrements of good fish husbandry, but the poison was already in the water before we scooped it out of the river.  For hundreds of years, heavy metals have been leaching into the River Hayle and are found at levels fatal to many fish.  If a trout from nearby rivers such as the Camel were to be transplanted to the Hayle, it would be lucky to survive 24 hours, such is the concentration of heavy metals in the water.

Swimming beside our recently discovered flounder were a handful of Hayle trout.  Seemingly untroubled by the powerful blend of heavy metals dissolved in the clear river water, these fish have evolved to protect themselves from these toxins and can survive, and indeed appear to thrive in an environment fatal to other members of their species.

The work of our long-time partners, the Molecular Ecology and Evolution Group from the University of Exeter, has shown that this evolutionary survival strategy of Hayle trout has left its mark in the DNA of the local fish.

Whilst this is known, there is still much to be done to understand exactly how this is possible, and our mission that day was to collect blood samples of the fish to sequence their genome and find out exactly how these trout swim in waters that others of their species are simply not be able to live in.

I am old enough to have started my genetic work when a DNA sequence was discovered by reading grey lines on a piece of photographic film.  This was a process which involved a lot of waiting around, and mouth pipetting radioactive phosphorous, a practice which is thankfully no longer required of Dan, the Exeter PhD student who is studying the Hayle trout’s genetic make-up.

What Dan is, in fact, aiming to understand is the entire genome of our Hayle trout we caught that day.  The progress in the scale and power of genomics is truly astonishing.  The unit of genetic information is the ‘base-pair’, a couplet of the ATGC building blocks of DNA that most school children now know from Biology lessons.  Whilst I was painstakingly counting 300 or so individual base pairs ATGCTAATC and so on, with the aid of a permanent marker on photographic film more than thirty years ago, the trout from the Hayle will have every single base pair of their genome (of nearly three billion base-pairs) counted multiple times in order to ensure that we have got the read exactly right.  Using this complete genome information, we hope the secrets of heavy-metal trout can be unraveled.

Our flounder was not going to have its genome examined, so we can only presume that it had no special adaptations to the Hayle river.  It’s quite possible that it will be unable to survive the heavy metals in the Hayle, and will soon die.  However, flounder are often found in muddy and rather polluted estuaries, so it may be that the bottom-dwelling flounders are made of sterner stuff than the normally clean-living river trout. We certainly hoped that was the case, as we slipped our flounder back onto a sheltered reed bank in the middle of the Hayle river.

The survey was delivered as part of the Water for Growth partnership between Westcountry Rivers Trust, The Environment Agency, and Natural England.  We are also grateful for the financial support of the Cornwall European Regional Development Fund, and the Ministry for Communities and Local Government.