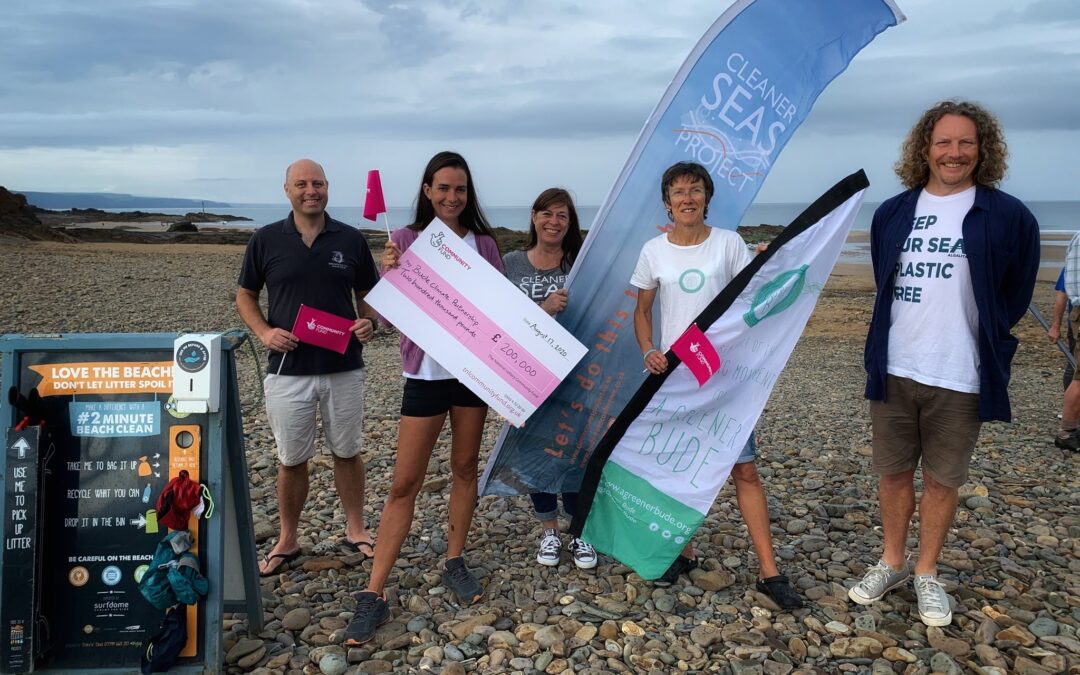 Bude Climate Partnership, a group of 12 local community organisations, including Westcountry Rivers Trust, has been awarded £200,000 by the National Lottery Climate Action Fund for an 18-month project to investigate, test and develop ways to protect the Bude area and community against the impact of climate change.

Led by Bude Coastal Community Team, the partnership’s successful bid for Lottery funding will enable the Bude area to develop its community response to climate change. It follows the declaration of a Climate Emergency by Bude-Stratton Town Council in September 2019.

The funding – one of only 15 projects chosen from 650 nationwide applicants for Lottery funding – will be used for a series of studies and pilot projects that will investigate the best ways for Bude to deal with the climate crisis generally and in specific areas, such as tourism, agriculture, local transport, the young and the elderly.

Simon Browning, Senior Data & Evidence Officer at Westcountry Rivers Trust (pictured left), who is also a Bude-Stratton Town Councillor, said: “We’re thrilled to have received funding to further our work in the Strat and Neet catchments. The Climate Action Fund project will help us assess the specific challenges that local communities face as our climate changes.

“As we see more extreme weather – heavy rain and droughts – it is vital our river catchments are in good shape to maintain good water quality and to minimise flooding and disruption to farming and wildlife. We’re keen to talk to landowners who want to find out how to reduce runoff and hold more water in their soils.”

For more than 25 years, we have been working with farmers and communities across the region to tackle diffuse pollution and improve the health of our rivers and their habitats. From 2002–2006, we visited 59 farms in the Strat and Neet catchments as part of the Cornwall Rivers Project. Our farm advisors gave water-friendly farming advice, covering more than 3,800 hectares and helping to fund more than 22 km of riverbank fencing.

Our Devon and Cornwall Soils Alliance project is currently running one of seven feasibility studies in the Lower River Neet to build capacity in soils advice locally.

He added: “It will make a big difference to our community’s ability to face the challenges of climate change. As a coastal community in a remote, peripheral location, Bude is particularly vulnerable to climate change. This funding will help to ensure our economy, residents and businesses can find the best ways to protect our precious way of life and our beautiful coastline from its effects.

“The Lottery told us that one of the factors that sealed it for us was the enormous amount of environmental work already done by the Bude community. All that passion and hard work greatly improved our chances.”

Bude Climate Partnership brings together the skills, experiences and interests of a wide variety of local environmental and community-interest groups.

The funding award is a notable success for Bude Coastal Community Team, which was set up to help the Bude area’s councils, community and businesses collaborate on environmental, social and economic projects.

Rob, who initiated and led the bid with the help of Bude Coastal Community Team, added: “Bude Climate Partnership is incredibly grateful for the support and guidance of Bude Coastal Community Team in securing this funding. Without BCCT’s invaluable advice and hard work, I have no doubt that we would not have been successful. BCCT really made all the difference and we’re very lucky to have it.”

The 18-month project involves 12 schemes and initiatives delivered by the core members. The findings and experiences will be shared with other organisations and communities in Bude, throughout Cornwall and in other coastal and remote locations.

A community carbon audit and studies into tourism, local transport and Bude’s large retiree community will examine the local carbon footprint and find ways of protecting the economy and residents against climate change threats. Other studies will assess the physical impact of climate change on the coastline, countryside and town.

Work with farmers and landowners will investigate how to protect the landscape and examine ways of using land for carbon sequestration.

The project has the support of Cornwall Council, Bude-Stratton Town Council and the Cornwall & Isles of Scilly Local Enterprise Partnership. It aims to help the community play its part in helping the two councils reach their target of carbon neutrality in Bude and Cornwall by 2030. The project’s affiliate partners, including A Greener Bude, Budehaven Community School, Climate Action Bude and Transition Bude, will also be supported.

Nick Gardner, Head of Climate Action at The National Lottery Community Fund, said: “We’re delighted that, thanks to National Lottery players, people and communities across Cornwall will be taking action to reduce their carbon footprint and demonstrate what is possible when people take the lead in tackling climate change.

“From 25 years of funding environmental projects across the UK, we know that local community action is at the heart of delivering solutions that not only minimise the impact on the environment, but also offer additional benefits that people and communities can reap. In the last few months we have been reminded that communities truly understand their places and spaces, and so often play a vital role in responding in a crisis, and we’re confident with people in the lead communities can tackle climate action and responding to the climate emergency.”

Paul Tilzey, Chair of Bude Coastal Community Team, said: “It’s a fantastic outcome, and demonstrates that through the collaboration of Ian Saltern, BCCT’s Community Projects Manager and Rob in drafting the grant application, we’ve been able to bring this much needed investment to the local community.”

Sue Holmes, Director of the ReFill Shop and co-founder of Climate Action Bude, said: “We are absolutely delighted to have been awarded this funding. We have so many ideas and so much public support for the development of our existing project into something that serves as a hub for all things environmental. Climate change is the biggest threat humanity has ever faced and this funding will help our vulnerable coastal community to build some much-needed resilience.”

By bringing their own reusable containers, customers of Bude’s ReFill Shop have helped save the equivalent of 9000 plastic bottles, over 1600 plastic toothbrushes and 700 disposable razors from entering the waste stream. As well as reducing food packaging waste from cereal, snacks and store cupboard essentials, the shop helps reduce food waste as customers can buy exactly what they need. The shop continues to work with Bude Food Bank, offering a voucher scheme that allows people to choose what they need rather than them having to accept donated goods.

Martin Dorey, Founder and CEO of The 2 Minute Foundation, said: “We are thrilled to be a part of this project. It is a great opportunity to work on ideas locally that may end up being implemented globally. Understanding what drives people to make changes is vital to our future and we firmly believe that the ethos of small, steady steps can add up to big changes. This has been proven by our #2minutebeachclean campaign. We can’t wait to bring this kind of positive thinking and success to this project.”

In 2007, when Martin found a beach knee deep in plastic waste, bottles and fishing gear, he vowed there and then to do something, anything, to make a difference. His simple social media idea has turned into 133,000 posts on Instagram alone, many more on Twitter, and at least six months of cumulative beach cleaning time spent removing hundreds of tonnes of litter from the world’s beaches. From one beach-cleaning station trialled in Bude in 2014, The 2 Minute Foundation now has a network of 880 beach cleaning stations around the UK and Ireland.

Richard Wolfenden-Brown, Chair of Connect Bude, said: “Connect Bude was formed to give voice to strong local support for the return of rail to Bude. Vital for connectivity and access to work, training, health care, leisure and culture, a modal switch from private transport to green public transport would make a huge contribution to Bude achieving carbon neutrality by 2030.”

Bude Coastal Community Team is a volunteer-led Community Interest Company working to maximise economic, social and environmental benefits for the Bude area via community partnership and collaboration. It is a project-based organisation that links local councils, businesses, voluntary organisations and community-minded people. In 2019, BCCT signed a Memorandum of Understanding with Cornwall Council, Bude-Stratton Town Council and Cornwall & Isles of Scilly Local Enterprise Partnership to prioritise the delivery of projects under BSTC’s Neighbourhood Development Plan and BCCT’s Economic Plan detailed in the Bude-Stratton Strategic Programme.

The National Lottery Community Fund launched a new £100 million Climate Action Fund in September 2019 to enable people and communities to take the lead in tackling the climate emergency. Funded by the largest funder of community activity in the UK, it aims to build a network of people and communities, well-placed to drive change within, between and beyond their community. The new fund was launched as the level of concern over climate change continued to rise, with 80% of the public saying they are very or fairly concerned about climate change.