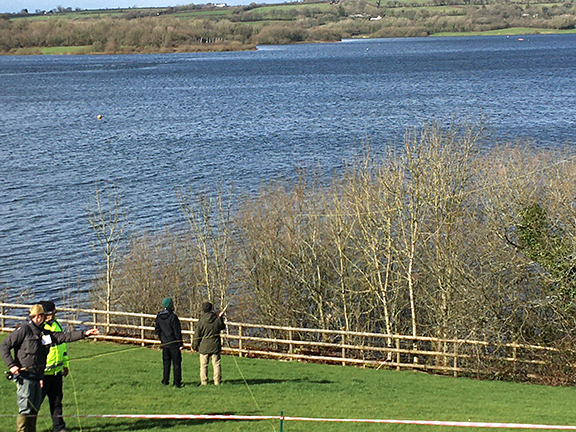 The eighth South West Fly Fair got the Trout fishing season off with a bang on Saturday 29 February as fly fishermen from all over the region attended the annual show, held at Roadford Lake and hosted by South West Lakes Trust.

The show is always a great place to grab a bargain, watch some fantastic demonstrations from Trout fishing celebrities and speak to the many organisation and trade stands that attend. There was also a free fly casting and fly tying zone for anyone to have go.

The show was launched by Ben Smeeth, Head of Angling for South West Lakes Trust, and then officially opened at 10.30am by Charles Jardine, one of the country’s most respected fly-fishing gurus, England Fly Fishing Commonwealth Team member and patron of the show.

Activities throughout the day included casting demonstrations with Charles, who gave an entertaining and impressive display with the Trout rod, and Gary Champion, a local expert who travels worldwide teaching people to fish and give demonstrations.

More than 30 people took advantage of the free fly casting lessons and clinics for both newcomers to the sport and experienced anglers feeling a little rusty after the closed season. Gary Champion gave a fantastic demonstration on ways to prepare and cook your Trout once you have caught it with samples to taste. This was a real treat on a very cold day!

There were a variety of angling conservation organisations including The Westcountry Rivers Trust, The Wild Trout Trust and local custom rod maker, Luke Bannister, who has built up an international following for his beautiful hand-crafted split cane rods.

Those looking for new fishing opportunities in 2020 were able to speak to representatives from various fishing clubs throughout the region.

There was also a large selection of angling trade stands including impressive displays from the shows sponsor Chevron Hackles, with the opportunity to handle, try and buy this year’s latest equipment.

The 2020 Trout fishing season has started on the South West Lakes Trust Rainbow Trout water Kennick with Siblyback, Stithians and Burrator all opening on 7 March.

Full details and this year’s prices are on the Trust’s website – www.swlakesfishing.co.uk.