A fish swam past… Our Head of Fisheries Dr. Bruce Stockley reflects on life returning to a river following a weir removal.

While watching a river in July, a small fish swam past me.  Its movements were fast, nervous and darting.  Not unexpected you’d think, but I was witnessing the first movements of life in a new stretch of river.

Eight large concrete pipes had been heaved from rivers’ embrace, and placed on a farm trailer, ready for crushing and laying in a farm gateway.

For decades, the river had been forced through these pipes, the flow slowed, baffled and constrained as it tried to make its way downhill. 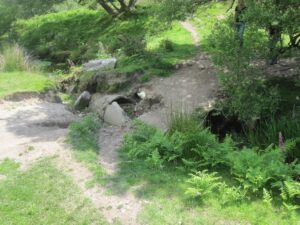 The Trenant Pipe Bridge before removal

Sediment had mixed with rotting concrete and broken rebar, making the passage through the pipes confused and indirect.

A small trout, such as the one I noticed, could surely have navigated its way through, if it so chose to do so.  Larger sea trout would not have found it so easy.

Those interested in fish are often concerned with their size, sometimes to the point of obsession.

A quirk which seems to apply to fisheries biologists, as much as anglers.

In this case, however size really does matter.  The small flickering fish that swam past me was most likely to be a male. 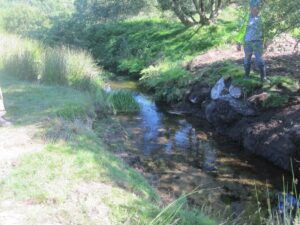 Producing sperm is much easier than producing eggs and can be done in the sheltered streams of Bodmin Moor just as well as anywhere else.  Producing eggs is a much more energy demanding process, and these moorland streams are sparse pickings for a hungry fish intent on producing hundreds of yolk-filled eggs.

That is why female trout often take the risky journey down the river to the sea, and the Cornish coast teams with a diversity of life, including sand eels, shrimp, and many other nutritious prey for a hungry sea trout.

So, in my imagination that little trout was a male, and by removing the migration barrier, he was much more likely to meet a migrating female trout, fresh from the sea when breeding season begins in the autumn.

Standing by this new, freely flowing stream, it’s my hope that we have enabled more sea trout to make their way up to the headwaters of the Trenant stream to breed.

By removing the barrier, rather than fitting a technical fish pass, we have ensured that it will always work, with no maintenance schedule required.  It has also turned a bridge into a new stretch of river.

As the farmers who owned bridge, and helped us remove it told us, “Just wait, now nature will take its course.” 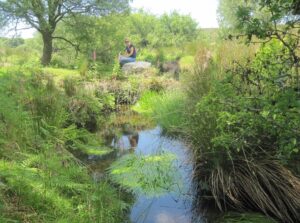 Downstream after the pipe bridge removal

When people tell you that, you expect to wait years, in fact, we only had to wait minutes.  In less than half an hour the stream had pocks and eddies, it had gravels and cobbles, and I can confirm, it even had a fish.

The removal of Trenant pipe-bridge was delivered as part of the Water for Growth partnership between Westcountry Rivers Trust, The Environment Agency, and Natural England, with the support of the Fowey Rivers Association.  We are also grateful for the financial support of the Cornwall European Regional Development Fund, and the Ministry for Communities and Local Government, and South West Water.