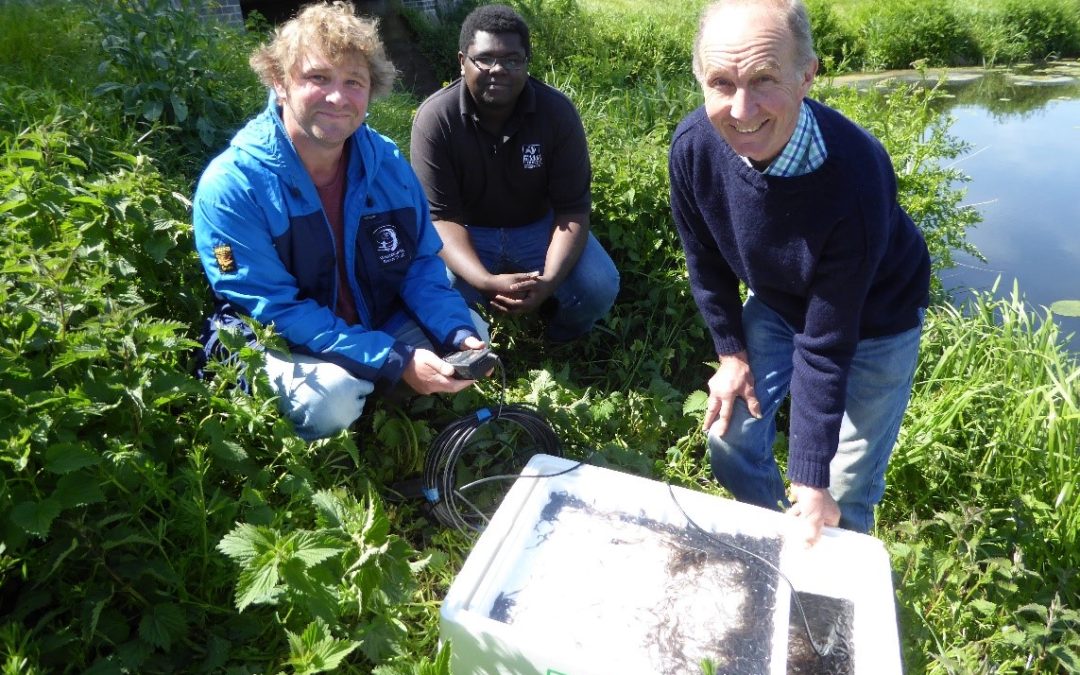 Elver fishermen on the River Parrett in Somerset have donated 20,000 elvers from catches to help boost eel populations in the River Huntspill.

And we were on hand to help release them (see photo below).

With the help of the Somerset Wildlife Trust, the Sustainable Eel Group,and the Environment Agency, and our Fisheries Scientist in Somerset Scott West, the young eels were released to the South Drain near Bridgwater, above Gold Corner pumping station.  This will assist their upstream migration – to find new homes in the rivers above, and the wetlands of the Somerset Wildlife Trust’s Avalon Marshes and the RSPB’s Ham Wall nature reserves. 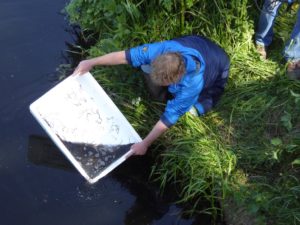 The elver fishermen catch only a portion of the huge surpluses of elvers that enter the Parrett, but this donation also ‘gives something back’ to the river.  It releases them above barriers to migration they might not have reached where they can make best use of the natural ecosystem to produce as many adults as possible to return for spawning.

1.3 million barriers across rivers in Europe mean that the eel can only access 10% of the habitats it used to.  Numbers of the once common eel is reduced by 90 – 95% compared to 40 years ago and is now classified as ‘critically endangered’.

The Somerset rivers and wetlands are ideal habitat for eels. They will grow there, become part of the ecosystem and will migrate in 5 – 20 years to sea to spawn and continue the species.

David Bunt of the Sustainable Eel Group said: “We are delighted that the fishermen have made this donation.  The Parrett is one of the most sustainable elver fisheries in Europe.  By doing this, the fishermen are giving something back to the river and to nature to help the eel’s recovery”. 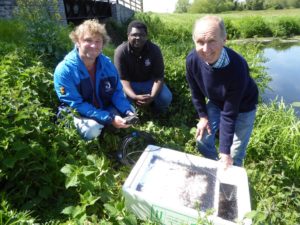 Scott West of the Westcountry Rivers Trust, Nathaniel Legall of the Somerset Wildlife Trust and Peter Neusinger of Eeline UK prepare to release the elvers into the South Drain

Nathaniel Legall, Project Officer with the Somerset Wildlife Trust said: “By releasing these elvers to the South Drain, we have assisted their migration past the major barrier of Gold Corner pumping station.  They are now free to inhabit many miles of river and acres of wetland”.

The eels were collected from the fishermen and released with the help of eel trader, Eeline UK Ltd.

Eels are an important part of the water environment.  They feed on dead and decaying animals – helping to recycle nutrients.  They are also important food for otters and birds such as herons, egrets and bitterns.

European eels have an extraordinary life cycle.  They start as eggs in the Sargasso Sea near Bermuda and spend 18 months floating on ocean currents towards the coasts of Europe and North Africa.  They enter rivers and lakes and spend anything from 5 to 20 years feeding and growing into adult eels. They then return to sea and swim 3000 miles for over a year back to spawn in the Sargasso Sea.