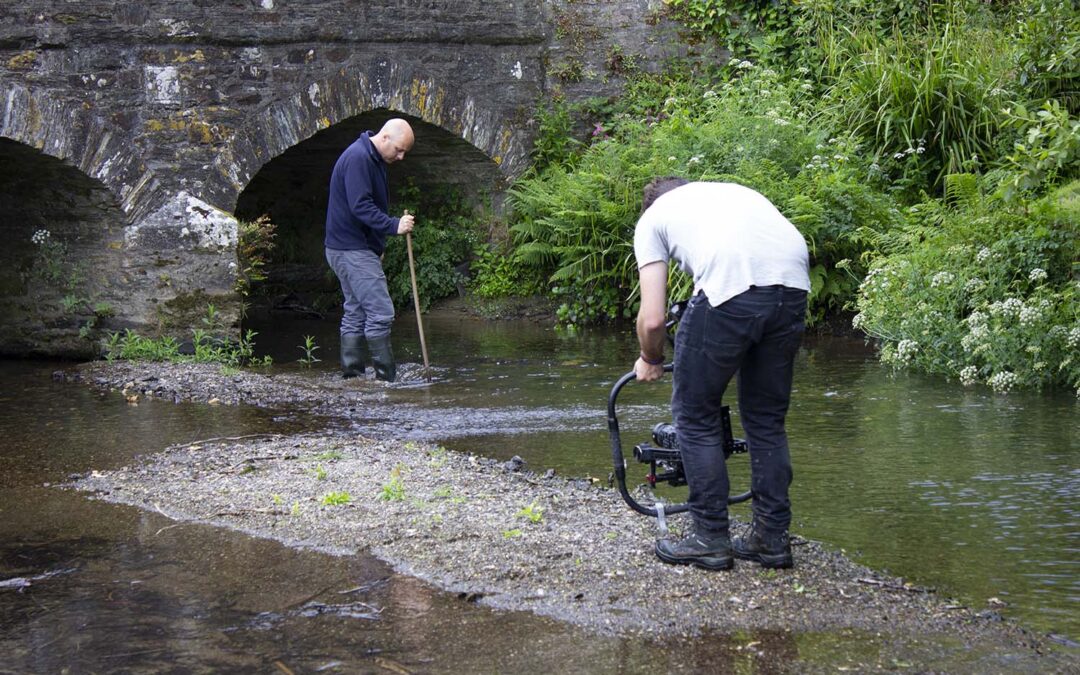 In July, our senior monitoring officer Simon Browning spoke to the Cornwall Area of Outstanding Natural Beauty about one of our projects that has taken place in their geographical area.

Simon in the Fowey catchment being filmed for the 2019 USAR project information film – view on the project page.

“Sediment might not be the first thing that comes to mind when you think about environmental pollution. Pollution is toxic green sludge or oil spills, right? Not always. Excess sediment in our Westcountry rivers is right at the top of the list of pollutants that degrade our river habitats and water quality. “But it’s just soil”– I hear you cry, well it’s not that simple. Sediment in our rivers comes from a number of places – some of it is soil washed off of cultivated fields in heavy rain, but even that carries nutrients such as nitrate and phosphate from fertilisers and other chemicals – pesticides, herbicides and fungicides that are used on crops across Cornwall.

“Some of the sediment in our rivers is eroded from exposed mining spoil heaps or quarries – this can contain high concentrations of toxic metals such as cadmium, arsenic or lead. Then there’s road runoff – roads need to shed water quickly for safety reasons, but when rainwater runs off into our streams it can collect all sorts of nasties as it goes – exhaust gases deposit hydrocarbons onto the road surface, brake pads release cadmium as they wear and tyres shed rubber particles containing lead, cadmium and zinc. There’s also litter from roadsides and verges which contributes microplastic particles into the mix – and in Cornwall you’re never far from the sea, which is where it all ends up sooner rather than later.

“Even ‘clean’ sediment causes problems – the tiny particles that are washed into the rivers settle in the gravel beds where fish spawn and important aquatic invertebrates, such as mayfly and caddisfly larvae, like to live. Gravel that is clogged with fine sediment doesn’t support healthy populations of these creatures – which are an important source of food for trout, salmon and dippers – the foundation of a vibrant river ecosystem.  Clogged gravel beds don’t allow clean water to flow through, which leads to low oxygen levels and increased mortality of fish eggs laid within them.

“As if that were not enough, allowing soil to wash into our rivers is such a waste. It takes hundreds of years for nature to create a few centimetres of soil, yet this can be lost in just one rainstorm, never to return. As it accumulates in our ports and harbours it is an expensive nuisance to safe navigation and must be removed regularly by dredging. Around the South West much of this material is then disposed of at sea – remember those nutrients, toxic chemicals and microplastics…?

“In 2016, the Westcountry Rivers Trust were invited to join with organisations from France, Belgium, the Netherlands and the UK to take part in the Using Sediment As a Resource (USAR) project – funded by the European Union Interreg 2Seas programme. The project set out to increase reuse of material that is dredged from rivers, estuaries and waterways across Europe. Current legislation identifies dredged sediment as ‘waste’ and there are strict rules on what can be done with it once it has been removed. Despite much dredged sediment being a potentially valuable resource – across Europe it is typically disposed of at sea or dumped in landfill sites.

“Three of the project partners set out to pilot novel reuse applications to show the value of dredged material. Brightlingsea Harbour Commissioners planned to use dredged sediment to replenish and restore eroding salt marshes that provide valuable flood defences for surrounding homes as well as habitat for wildlife. HHSK, a regional water authority in the Netherlands, planned to mix sediment dredged from canals and ditches with cow manure and green waste to create a topsoil substitute that would help protect and raise up degrading peat polders. Flemish Waterways (De Vlaamse Waterweg) in Belgium planned to reuse polluted, sandy sediment from the River Scheldt in an ambitious programme of dyke building to protect homes from tidal flooding, while creating important (and unusual) freshwater inter-tidal habitat. Meanwhile the Armines research centre in France developed online resources to help sediment managers understand more about sediment reuse (the WikiSed online library) and an ‘Operational Sediment Management System’ that would help match sources of dredged sediment with those that may have a use for it.

“At the Westcountry Rivers Trust, our role in the USAR project has been to showcase ways of reducing sediment input to our rivers in the first place. An example was a sediment trap created in a farmyard in the River Lerryn catchment. The River Lerryn is one of three streams that enter the Fowey Estuary from the east. Due to the steeply sloping farmland, that area contributes significant amounts of sediment into Fowey Harbour. The sediment trap is simply two pits in series that intercept muddy runoff as it flows across the farmyard. As the runoff fills the pits it slows and deposits most of the sediment, leaving the water that overflows much cleaner. Because the sediment stays on the farm it is not classed as waste, the farmer can remove it from the pits once or twice a year and use it around the farm – either for replenishing lost soil or for creating raised banks that further reduce runoff.

To find out more about the project outcomes, visit wrt.org.uk/project/usar/.

This story ran in the Cornwall AONB’s environment column in the West Briton, Cornish Guardian and Cornishman on 1 and 2 July 2020.