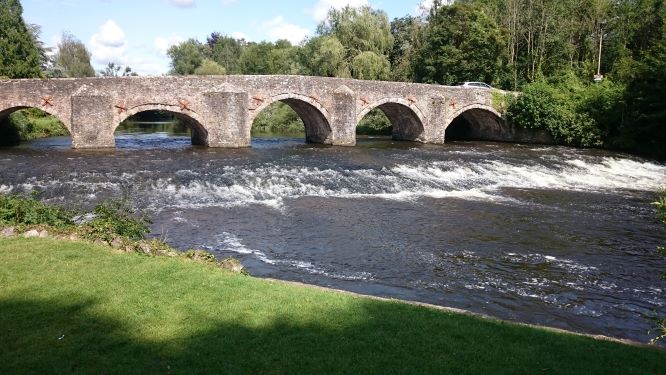 TODAY is World Fish Migration Day; what better time is there to talk about the work of the Strategic Exe Weirs (SEW) programme.

We are working to restore the natural migration patterns for native fish species in the River Exe, including Atlantic salmon, European eel, two confirmed lamprey species, and brown/sea trout. Over the past 50 years, migratory fish populations have declined globally by an average of 76%, and in Europe alone they have suffered a decline of more than 90%. This is reflected in the River Exe, as the Environment Agency have classified the Atlantic salmon as ‘At Risk’ .

Our native migratory fish need high quality river habitats to spawn and grow ready for life at sea. Between the Exe Estuary and Exmoor National Park there are numerous historic weirs, each acting as a challenge for upstream and downstream migration. Each weir delays movement to artificially restricted ‘flow windows’ when conditions such as water depth and flow velocity are just right for successful passage. Together, the weirs are having a notable cumulative effect and restricting access between important habitats. But more importantly, these ‘flow windows’ are shrinking due to more extreme flow events linked to climate change. Essentially, increased flood and drought events mean that the window is being squeezed.

The City of Exeter was built on the site of the Roman fortress “Isca Dumnoniorum”, a name describing the flowing water of the River Exe.  It is believed the name originally meant “full of fish” indicating the River Exe was once well known for its abundant fish populations.

The goal of each SEW project is to enable free migration by ensuring the ‘flow window’ is fully open all year round to counter effects of climate change on river flows. This will help to restore the levels of fish reaching their spawning grounds. Each weir has site-specific challenges and requires a bespoke solution, whether that be total removal, a technical fish pass, or minor modification.

Restoring the natural migration will enable dispersion of native fish throughout the river all year round, helping to protect species that are sensitive to water quality from acute and chronic pollution in lower reaches, by providing easy access to fresher and cleaner water upstream. Adult and young migratory fish are important prey for many well-known predators we all love to see by the river, including otters, herons, kingfishers, and sometimes larger fish. So restoring fish, has far reaching ecological benefits.

By freeing up migration for native species at each weir, we are working towards the ecological enhancement and sustainability of the River Exe in a changing climate. This will benefit species health now and in the future. And hopefully, with this work, the River Exe can return to the former glory of its namesake.