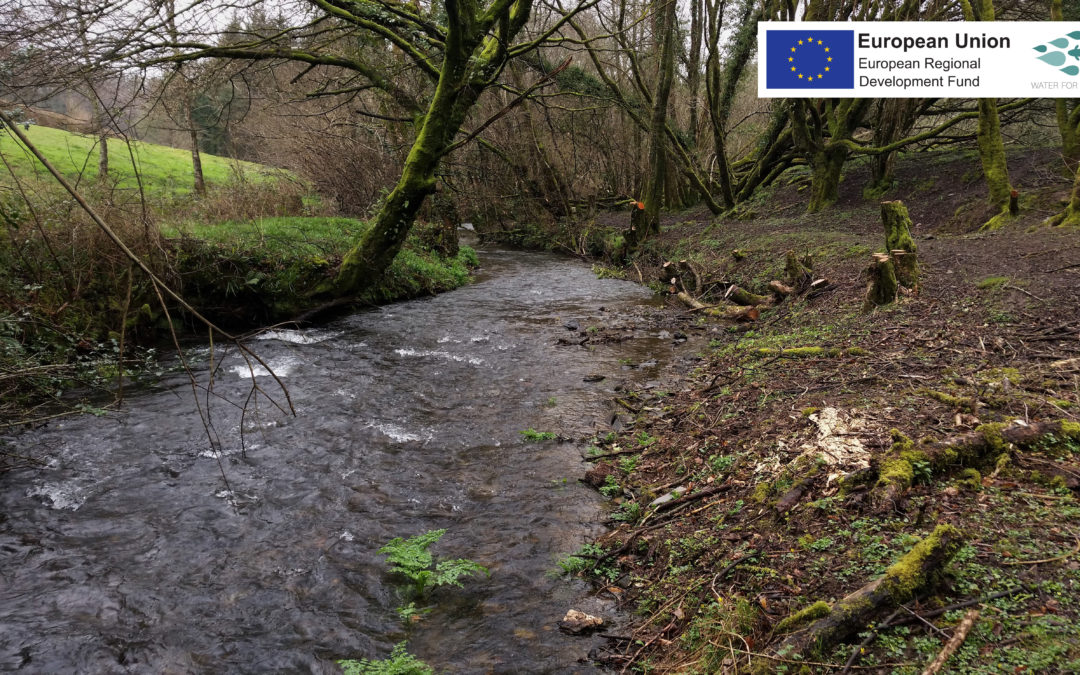 Removal of barriers to fish migration forms the greatest part of Water For Growth (W4G) but getting fish up to poor spawning grounds or unhealthy juvenile habitat would be a wasted effort so a program of rehabilitation of these areas has been employed to maximise the efficacy of the project. From gravel cleaning in the headwaters to improved shading regime over the shallow riffles where the early stages of salmonids spend their life, a strategic, targeted campaign of works has been employed to bring new life to the rivers Camel and Fowey. 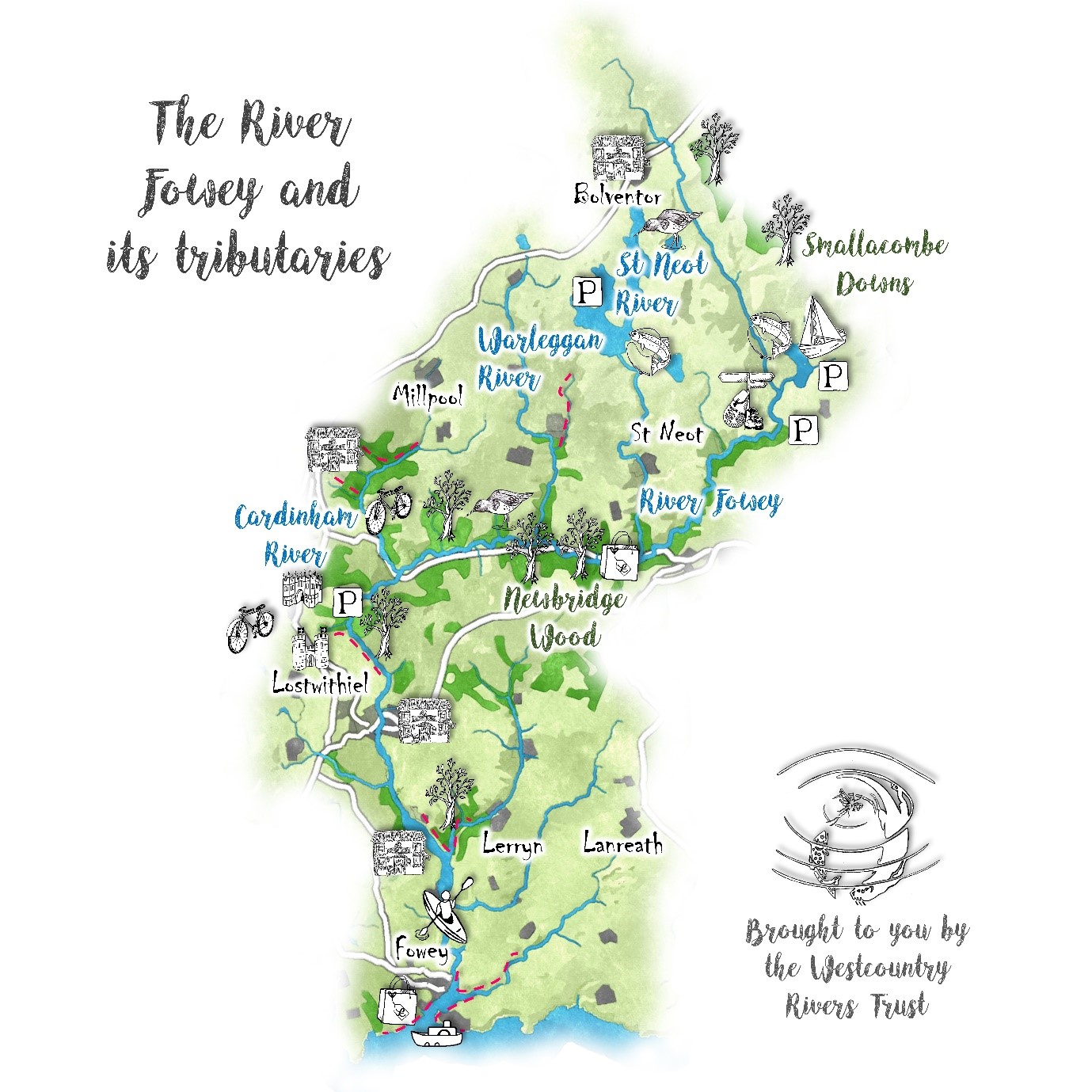 With three key tributaries of the Fowey flowing off the southern face of Bodmin moor and the main river running down from Brown Willy (Cornwall’s highest point), we turned to historic electric fishing survey data to identify where to concentrate our work.

Colliford reservoir at the top of the St Neot was built in 1983 and the resulting dam gave birth to a Salmon hatchery to mitigate for lost spawning grounds and also extremes of flow down the St Neot. With thousands of reared fry introduced to this tributary every year, improvements to the habitat was essential. Adding light to riffles to promote macrophyte growth in such a steep sided valley would be essential. These macrophytes form the bottom of the food chain that juvenile salmonids rely on, providing a food source for aquatic invertebrates that salmon and sea trout feed on before migrating out to sea (conversely deeper areas such as pools and glides require more tree cover to prevent the river warming too quickly in the summer months). Commercial conifer forests and the extreme gradients combined with little recent riparian management have left this key tributary over shaded. Punching holes through the canopy by removing Sycamore and beech has brought new life to the river and the introduction of some of this site won timber into the stream creates vital refuge for the juvenile fish from the high flows that releases from the reservoir can bring. Fallen trees can quickly become clogged by other limbs and debris washed down by these slugs of water, that are sent down from Colliford to be abstracted by Restormel waterworks at the bottom of the system. A series of partial or nearly complete trash dams have been identified and will be manipulated to avoid impediment of flow within in the channel to restore the passage of not only water, but also resident and migratory fish. Over the course of the project we aim to complete a variety of works at 21 sites aiming to enhance and reconnect the whole 7.5km reach of the St Neot. 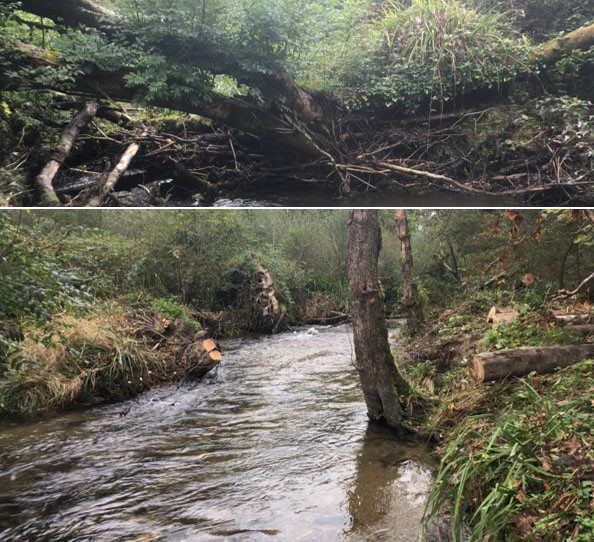 The Cardinham stream has consistently been one of the best performing spawning parts of the Fowey catchment with several survey sites regularly achieving top classification. Surveying in the summer of 2017, our team was shocked to find a total absence of salmon where they would normally be abundant. Walking over the river downstream a major trash dam was identified. This collection of trees, branches and sediment, held fast in the flow, was assessed as totally impassable and the likely cause of the sudden drop in fish numbers. We notified the Forestry Commission who manage this stretch and they were very pro-active in getting this and an additional blocker discovered downstream removed swiftly and completely to restore access to the gravels above and 2018 surveys have once again found salmon fry. We hope that every action we make has a clear and measurable impact on the health of the river but sometimes even the most granular examination of data cannot determine exactly how our work has improved matters. However, in this case a single piece of river work, led by analysis of surveys, has had a near binary change to a consistently high performing tributary.

The Warleggan completes the triptych of tributaries and sits neatly between the St Neot and Cardinham, geographically and in character. Its primary issue is the dense canopy that tunnels the river, flying a quadcopter drone directly over the river shows only tiny fractions of visible water. Strategically opening up this canopy with a combination of arboreal techniques has been programmed for the autumn of 2018 through to early 2019. Fast growing sycamore with its broad leaves shades not only the river but also the healthy variety of other tree species that contribute to a rich ecosystem. Beech is another heavily shading tree that has a similar negative impact on the whole riparian strip, its canopy and heavy husks from fruiting bodies greatly reduce the volume of ground flora beneath it. Where possible, selective trees will be felled to promote a better and varied mix of species and increase levels of light on the river. felling may not always be possible or appropriate so crown raising (removing the lower limbs of a tree’s crown) may be employed, especially on oak and ash where felling would reduce the diversity, but their canopy is overshadowing habitat. Due to the growing concerns of Ash Dieback (Hymenoscyphus fraxineus) our River Ops. Arb Team are being sympathetic and forward thinking where management of Ash trees are concerned, following best practice and guidance from a variety of government and industry professional bodies. Ash are a fantastic riparian tree species and their potential loss from the river banks is a concern due to the vast range of species they support and the ideal nature of their lighter shading canopies. 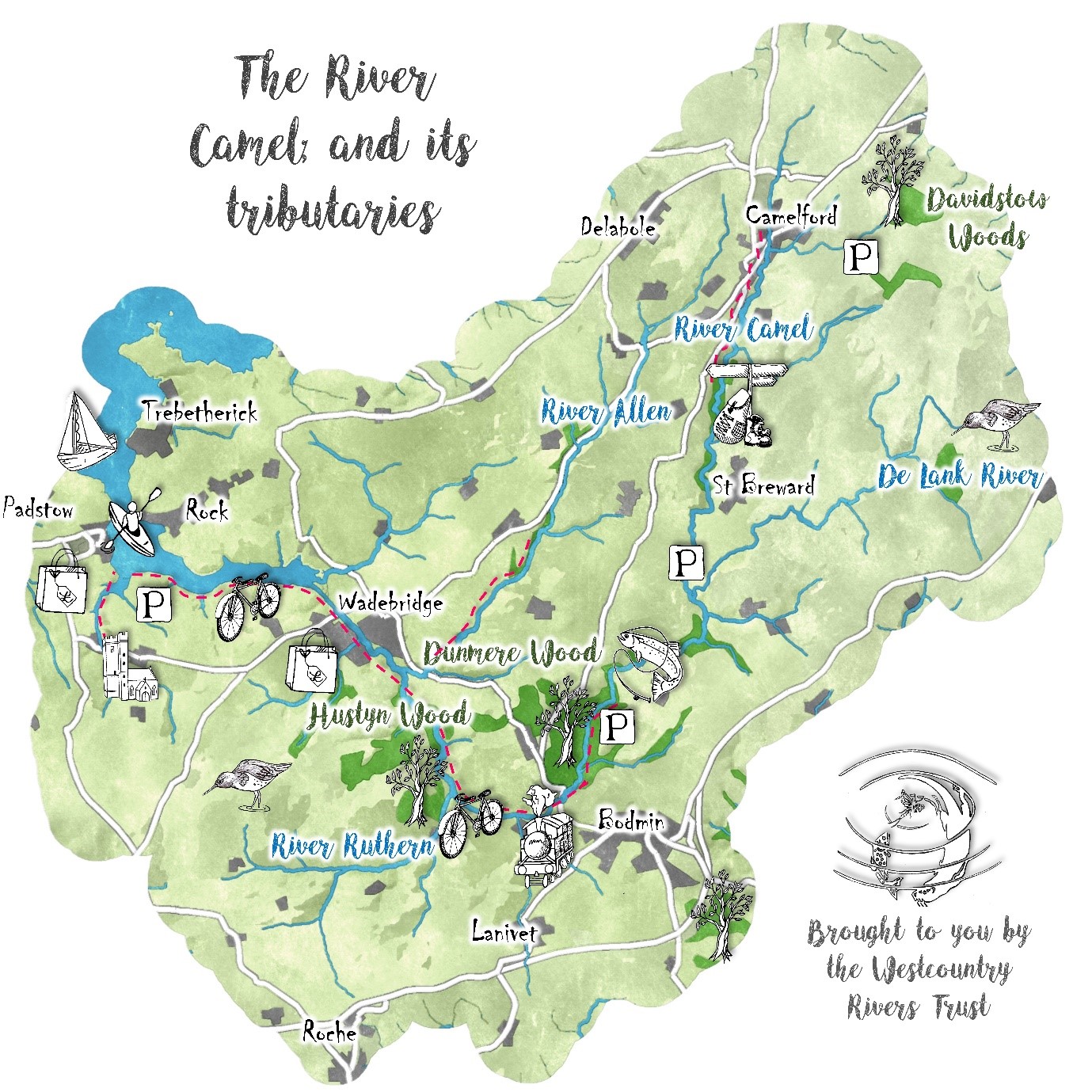 Like the Fowey, much of the Camel flows off Bodmin moor with Brown Willy forming the watershed between catchments. The northern face of the moor drains west towards Bodmin before flowing north through Wadebridge to the estuary at Padstow. Unlike the Fowey the mosaic of tree cover is a little more varied and open and the historic survey data a lot less complete, combined with the Camel sitting within a SAC and SSSI, this has made programming work more challenging. With W4G being a partnership between WRT, the Environment Agency and Natural England, we were able to work closely with the latter to design sympathetic solutions that they were happy to approve.

Initially tree work concentrated on debris dams that both WRT and local angling clubs identified. Though some were deemed passable and even beneficial to the habitat, one major blocker below Kenningstock weir was partially removed to restore flows whilst maintaining the refuge and diversity that a fallen tree can create.

Based on historical EF data suggesting the Ruthern was a successful salmon tributary and being located low down the catchment, we have chosen to carry out works similar to those described on the St Neot, although the location of the Ruthern lends itself to better access. Therefore, at one of our sites, after obtaining a felling licence, we used a Tree Shear, whilst dry summer access to the field was available. The work saw three large stools of abandoned Sycamore coppice removed and suitable species will be replanted at this site.

Recommended as a previously productive albeit mainly “Trouty” stream the St Lawrence was highlighted as a possible work target. A coarse walkover of the lower reaches identified it as heavily tunnelled along the reach and pinpointed 6 key riffle areas for. We have completed works to one of these sites and so far, and this year’s EF survey showed the Trout classification at this location rose from a ‘C’ to a ‘B’. Our surveys also discovered a number of salmon fry at a survey site lower down on this tributary in 2018 raising from an ‘E’ (absent) to a ‘D’ with the Trout score also rising from a ‘D’ to a ‘C’. We also have work planned at further sites along the St Lawrence for coming year. 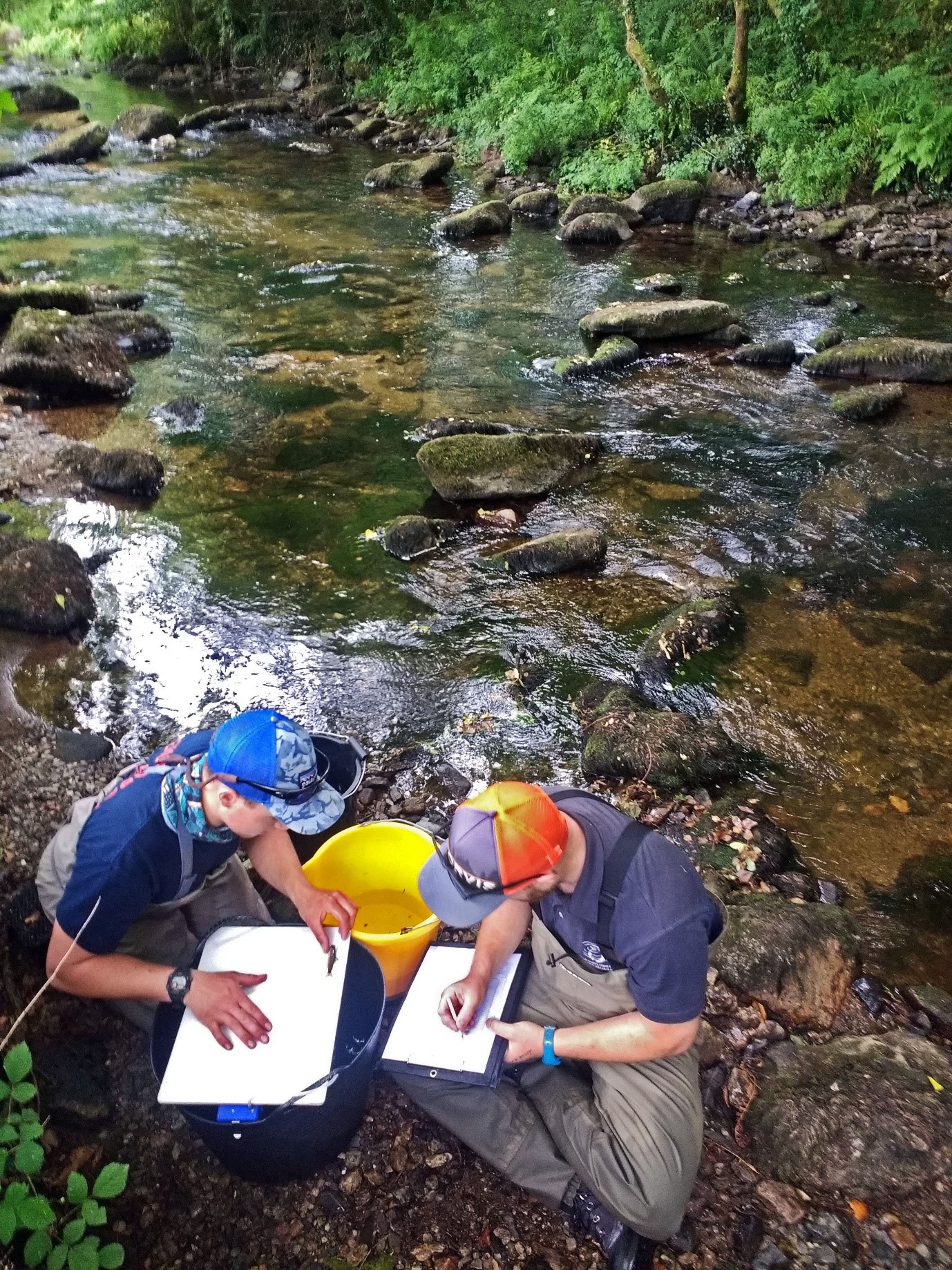