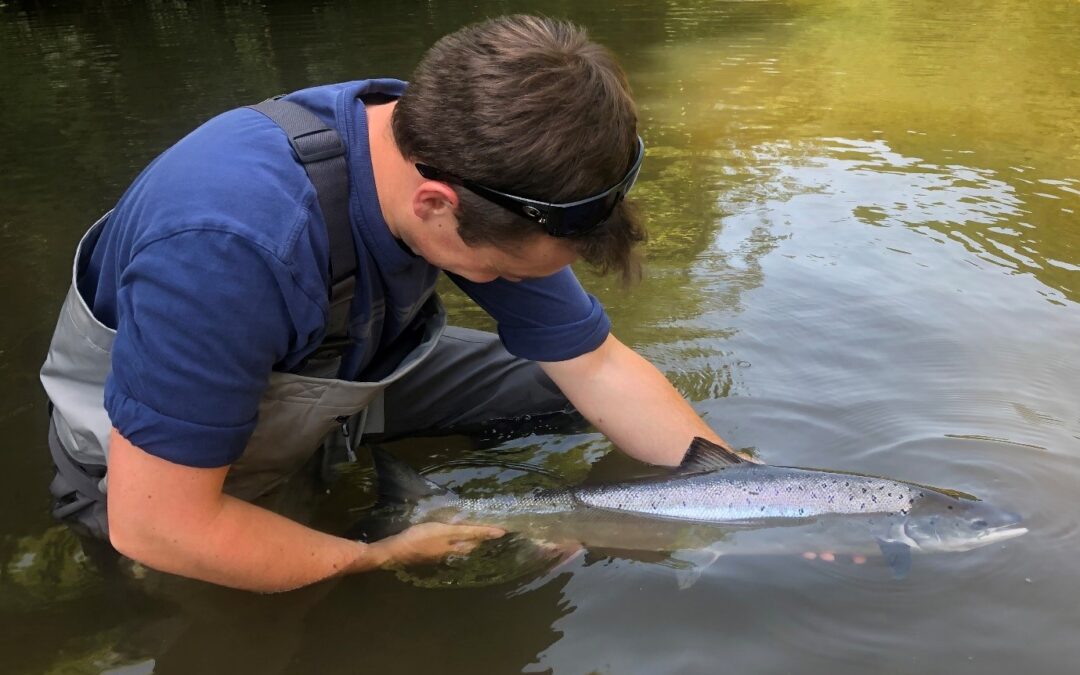 Increasing the number of Atlantic salmon (Salmo salar) smolts leaving the Tamar catchment is the focus of our Roadford Dam mitigation work.

Since the construction of the dam (completed in 1989) on the River Wolf; a tributary of the Tamar catchment, the Roadford Lake Fisheries Liaison Committee (RLFLC) has agreed on a number of dynamic mitigation responses such as hatchery stocking and estuary net buy-outs.

In addition to the RLFLC interventions, Westcountry Rivers Trust (WRT) is working with the Tamar and Tributaries Fisheries Association, South West Water and the Environment Agency on a robust action plan to provide a fresh angle on the restoration, protection and management of the Tamar catchment.

This not only responds to the ongoing mitigation of Roadford Dam, but diminishes new challenges in the catchment such as agricultural pressure and habitat suitability.

Our collaboration has a target to produce 3,740 Atlantic salmon (Salmo salar) smolts leaving the catchment per year. This number is derived from the previous RLFLC mitigation measure, the estuary net buy-out, which set a target of an additional 187 adult salmon entering the catchment.

At the time of the project’s inception, the marine survival rate (as calculated by the Environment Agency as part of their index river monitoring of the Tamar) for both one-sea winter (1SW) salmon (or grilse) and multi-sea winter (MSW) individuals was 6.2%.

WRT used a more conservative 5% marine survival in order to account for mortality on the downstream migration between nursey areas and the site of index monitoring. 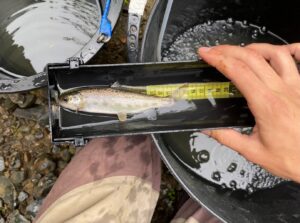 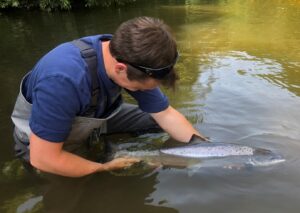 Figure 2. Adult S. salar returning to the catchment on a spawning migration

The programme has taken a dynamic stance on easing the presence of Roadford Dam by adopting the Rebuild>Restore>Defend framework developed by Ronald Campbell of the Tweed Foundation.

This approach distinguishes between different areas of a catchment, and clearly identifies different types of activity suitable for that sub-catchment depending on its ecological status.  Areas of the catchment with good fish stocks and well-functioning ecology do not need radical interventions to produce more fish.  In fact, radical actions such as the introduction of hatchery fish will often displace wild salmonids and are more likely to damage salmonid production than improve it.

The main interventions being delivered are riparian tree work, gravel cleaning and the easement of debris blockers to improve migration both upstream (for returning adults) and downstream (for smolts), along with individual large-scale deliverables such as gravel augmentation on the River Wolf.

The project has also assisted in the inception of numerous other projects in the catchment and in the past three years has delivered more than 300 individual sites of interventions and monitoring.

The actions delivered are informed by peer reviewed literature, and continuously monitored by fully quantitative electrofishing surveys that use a BACI approach (Before, After, Control, Impact) to provide baseline data before the interventions are delivered and impact data post-works. The data are then analysed along side control data (where no interventions have been delivered within a distance that has the potential to influence this control data) and Environment Agency Index River data to inform the overall return rates of S. salar. 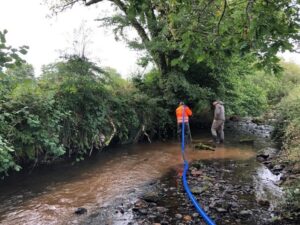 Figure 3. Gravel cleaning is used to remove excessive silt from spawning areas, which has the potential to block intra-gravel flow and impact egg development. 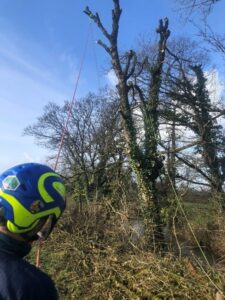 At the time of writing (Dec 2020), the programme is currently finishing its fourth year of electrofishing monitoring. Existing data presented below represents Year 1 pre-intervention data and Year 2 post intervention data.

Year 3 of monitoring was subjected to modified methodologies due to COVID-19 and social distancing procedures, so this data is yet to be included. As displayed below, the graphs show mixed results for interventions and different life stages. 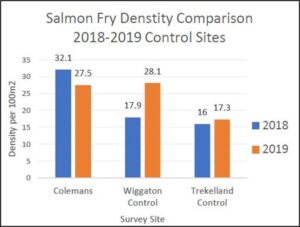 Figure 5. Salmon fry densities at control sites. The Trekelland Control above represents a comparable site to Figure 6 data, from the same river. 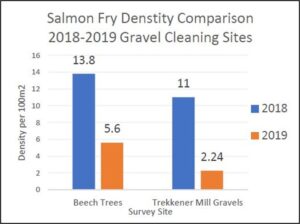 Figure 6. Densities of salmon fry decreased between 2018 and 2019 at the two monitored gravel cleaning sites.

As displayed by Figures 5 and 6, the fry (0+ age group) densities at gravel cleaning sites reduced significantly when compared to the control sites.

Could disturbing the gravels have reduced the abundance of invertebrate prey items? Has the gravel cleaning increased the likelihood of substrate being eroded by high flows? Of course, there is always the question as to how many adult fish chose to spawn in this location in the previous winter. It is hoped that future monitoring will reveal that, over time, the gravel cleaning has long term benefits.

The monitoring at riparian tree sites also produced mixed results. Again, we can use the highlighted entry in Figure 5 to compare, as this is once again the same river.

Figures 7 and 8 below present data for before and after riparian tree works. However, this time we present both fry and parr/adult (1+) data (respectively). 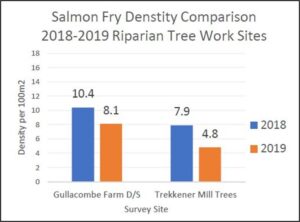 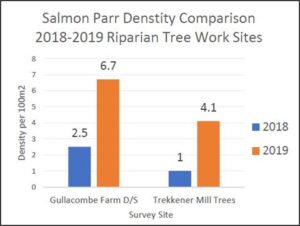 The results in Figures 7 and 8 require some level of interpretation, as although fry densities decreased, the marked increase in parr density is a good result. Parr are better able to preferentially select habitat than fry, so the localised movement towards works areas suggests that this habitat has successfully been improved.

A number of discussion points have arisen from the mitigation program, not only in the direct monitoring of specific restorative techniques, but in the form of how to approach a restoration program on a catchment scale.

It is hoped that both the data collected, and lessons learned throughout the process will further inform the future of this project, and other large-scale restoration projects.